Diseases and parasites can affect the mortality of wild forest reindeer, both directly and indirectly. Their general condition may be reduced so that they become more susceptible to other sources of disease, as well as to large predators.

Climate change promotes the spread of parasites normally considered tropical into the North. These include, for example, the insect-mediated parasites of the Filarioidea superfamily.

The early twenty-first century saw the spread of the lymphatic nematode (Rumenfilaria andersoni) which according to studies was found to occur in about half of the Suomenselkä population and as much as 71% of the Kainuu population. The summers of 2002 and 2003 were unusually warm in Finland, and warm summers favour the parasite life cycle and make disease outbreaks possible.

The deer fly (Lipoptena cervi) uses the wild forest reindeer as a host. Animals with deer fly parasites experience stress, shake their bodies vigorously, and rub their fur with their antlers and hooves. Extensive damage to the coat increases energy use, causes heat loss, and harms the animal's welfare. Skin changes leave the wild forest reindeer open to a variety of infections.

Photo: Wear and tear on the coat caused by deer fly can be seen as escaping heat in this picture. 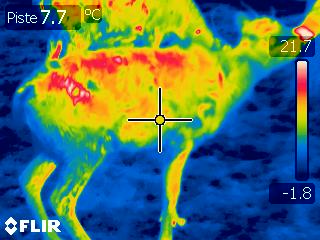